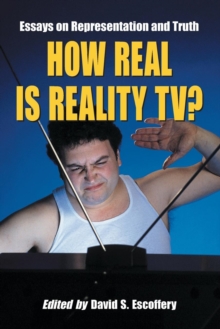 How real is reality TV? : essays on representation and truth

By: Escoffery, David S.(Edited by)

American viewers are attracted to what they see as the non-scripted, unpredictable freshness of reality television.

But although the episodes may not be scripted, the shows are constructed within a deliberately designed framework, reflecting societal values.

The political, economic and personal issues of reality TV are in many ways simply an exaggerated version of everyday life, allowing us to identify (perhaps more closely than we care to admit) with the characters onscreen.

With 16 essays from scholars around the world, this volume discusses the notion of representation in reality television.

It explores how both audiences and producers negotiate the gulf between representations and truth in reality shows such as "Survivor", "The Apprentice", "Big Brother", "The Nanny", "American Idol", "Extreme Makeover", "Joe Millionaire" and "The Amazing Race".

Various identity categories and character types found in these shows are discussed and the accuracy of their television portrayal examined.

Dealing with the concept of reality, audience reception, gender roles, minority portrayal and power issues, the book provides an in-depth look at what we see, or think we see, in "reality" TV.