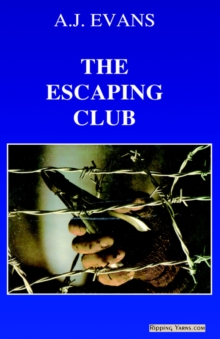 Imprisoned in the "escape-proof" Fort 9, the WW1 equivalent of Colditz, The Escaping Club tells of A.J.

Evans daring escape from Germany. This book has been regarded by many, including Colditz author Pat Reid, as one of the greatest escape books of them all.

Just as in a later war Colditz was the camp where hardened escapers were imprisoned, in the Great War Fort 9 was the 'bad boys camp' where escape maniacs were sent.

Considered by the Germans to be escape-proof, the prisoners formed an "Escaping Club" to use cooperation and teamwork to outwit their foes.

Despite these obstacles, Evans managed to escape to Switzerland.

After repatriation, he was posted to Palestine where he crash-landed on the wrong side of the Dead Sea.

All he had to do now was escape from the Turks. and the merciless hot sun of the desert.