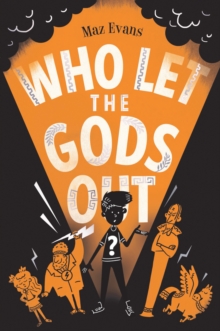 Who let the gods out?

Who let the gods out?

Part of the Who Let the Gods out? series

The first book in the hilarious bestselling WHO LET THE GODS OUT series, shortlisted for the Waterstones Children's Book Prize! 'I totally fell in love with Elliot and the gods, and I think you're all going to love them too.' ROBIN STEVENS 'One of the funniest new voices in children's literature. The laughs come thick and fast' DAVID SOLOMONS When Elliot wishes upon a star, he doesn't expect a constellation to crash into a dungheap on his family farm. The star is Virgo. She thinks she's perfect. Elliot doesn't. And together they release Thanatos, evil Daemon of Death ... epic fail. They need the King of the Gods and his noble steed.

Instead, they get a chubby Zeus and his high horse Pegasus. Are the Gods really ready to save the world? And is the world really ready for the Gods? An exciting, laugh-out-loud hilarious and highly-acclaimed Percy Jackson-esque adventure. Shortlisted for both the Waterstones Children's Book Prize and the Books Are My Bag Readers' Award. Hilarious and heartfelt, Who Let the Gods Out? is the first in a series centred on the Olympian gods - perfect for fans of Greek mythology! Loved Who Let the Gods Out? Make sure to check out the other books in the series, starting with book 2, Simply the Quest!