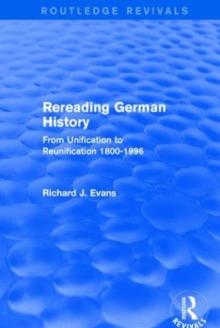 Evans draws together his seminal review essays on the political, economic, cultural and social history of Germany through war and reunification.

This book provides a study of how and why historians - mainly German, American, British and French - have provided a series of differing and often conflicting readings of the German past.

It also presents a reconsideration of German history in the light of the recent decline of the German Democratic Republic, collapse of the Berlin Wall and the reunification of Germany.

Rereading German History re-examines major controversies in modern German history, such as the debate over Germany's 'special path' to modernity in the nineteenth and twentieth centuries, and the discussions in the 1980s on the uniqueness or otherwise of Auschwitz.

Evans also analyses the arguments over the nature of German national identity.

The book offers trenchant and important analytical insights into the history of Germany in the last two centuries, and is ideal reading material for students of modern history and German studies.