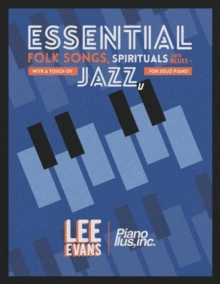 Essential Folk Songs, Spirituals and Blues : - With a Touch of Jazz, for Solo Piano

Among the reasons for the instant appeal and durability of folk songs, spirituals and blues are their melodic, harmonic and rhythmic simplicity and accessibility.

They are passed down by oral tradition from generation to generation, often undergoing changes in the process.

The provenance of such songs is often not known. However, some such songs of similar character may sometimes be attributed to specific known composers. (Examples of the latter include such well known gems as Woody Guthrie's This Land Is Your Land, Bob Dylan's Blowin' in the Wind, and Pete Seeger's If I Had a Hammer, among several others.) Each folk song and spiritual in this collection is imbued with a cultural heritage that reflects its roots.

At the same time, one cannot fail to notice various musical fingerprints added by later musicians over the years.

Having deep feelings in my heart for this material and having been inspired by my own background in jazz, jazz improvisation and jazz education, I herewith offer my own 21st century piano solo arrangements of these folk and spiritual classics, plus two original blues pieces, all written at the intermediate level with a tasteful touch of jazz.

Additionally, a template is provided for students to create their own blues compositions, as well as suggested guidelines for blues improvisation.

I am the author of over 100 published solo piano books in the United States, 38 in Japan, and 2 in the former Soviet Union.

Of all of them, I am especially proud of my early and intermediate level books such as Razzle Dazzle, Color Me Jazz books 1 and 2, Ole! and Fiesta! (both books consisting of original Latin American songs), Crash Course in Chords (a foundation theory/performance workbook), and my early-advanced level Jazz Piano Scales and Exercises.