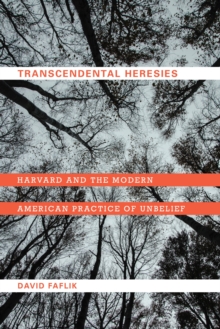 Transcendental heresies : Harvard and the modern American practice of unbelief

At a moment when the requirements of belief and unbelief were being negotiated in unexpected ways, transcendentalism allowed for a more creative approach to spiritual questions.

Interrogating the movement's alleged atheistic underpinnings, David Faflik contends that transcendentalism reconstituted the religious sensibilities of 1830s and 1840s New England, producing a dynamic and complex array of beliefs and behaviors that cannot be categorized as either religious or nonreligious.

Rather than ""the latest form of infidelity,"" as one contemporary described it, adherents viewed their unconventional and distinct spiritual practices as a modern religion.Transcendental Heresies draws on an expansive antebellum archive of period commentary and writings by transcendentalism's practitioners, including Ralph Waldo Emerson, Henry David Thoreau, Theodore Parker, Margaret Fuller, and the women of transcendentalism's second and third waves.

From Boston to Concord to the heady environs of Harvard, the species of unbelief they practiced multiplied the religious possibilities of the era, expressing misgivings about traditional notions of divinity, flouting religion's customary forms, and ultimately encouraging spiritual questioning.