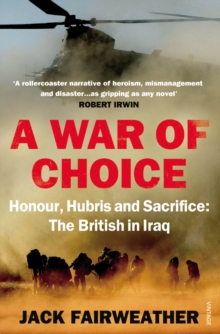 A war of choice : honour, hubris and sacrifice

A gripping account of the moral and political challenges posed by the Iraq war from the Costa Award winning author of The VolunteerWhen Tony Blair plunged Britain into war he thought that, shortly thereafter, Iraq would emerge as a peaceful democracy.

Instead the invasion sparked the worst foreign policy disaster since the Suez crisis in 1956.

A War of Choice is a compelling and authoritative portrayal of Britain's war in Iraq.

At the outset, Blair insisted that Britain went to war to influence American decision-making.

Based on over three hundred interviews, A War of Choice gives the inside story of Blair's war cabinet, Whitehall power struggles and intrigue at the White House, and traces the evolution of the special relationship, from the secret deals struck by Blair, to Brown's desperate bid to save his premiership, which brought already-strained relations with America to the verge of collapse. A story of hubris and honour, betrayal and the ultimate sacrifice, A War of Choice provides powerful insight into one of Britain's most controversial conflicts. 'A timely work that offers a considered appraisal of what went wrong' Times Literary Supplement