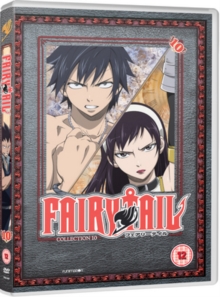 Episodes 109-120 of the anime series following the adventures of a young girl who is determined to join an organisation of wizards.

Membership of the organisation known as 'Fairy Tail' is Lucy Heartfilia (voice of Aya Hirano)'s goal when she runs away from home.

A boy she meets in a nearby town, Natsu Dragneel (Tetsuya Kakihara), and his talking cat, Happy (Rie Kugimiya), appear to offer a way in to the powerful guild.

Can she realise her dreams and become a wizard to be reckoned with?

The episodes are: 'Lucy Fire', 'Dead-End of Despair', 'Tears of Love and Vitality', 'The One Thing I Couldn't Say', 'Tenrou Tree', 'Erza vs.

Azuma', 'Freezing Fighting Spirit', 'Power of Life', 'Rolling Thunder', 'The Man Without an Emblem', 'Realm of the Abyss' and 'Daybreak On Tenrou Island'.