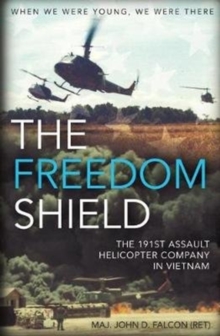 The Freedom Shield : The 191st Assault Helicopter Company in Vietnam

The Freedom Shield brings together stories of veterans of the 191st Assault Helicopter Company, tasked with carrying troops into battle, attacking enemy positions and evacuating the wounded in their UH-1 Iroquois "Huey" helicopters.

The unit was assembled from a hodgepodge selection of hand-me-down aircraft, used equipment and overlooked personnel-its appearance belied the invaluable work the crews of the 191st would undertake during the Vietnam War.

This narrative of the Company, told through collected stories of veterans, defines a breed of soldier newly minted in Vietnam: the combat assault-helicopter crewman. The 191st pilots, crews, and support personnel vividly share the details of what it was like to be at war, forced to rely on your fellow crewmembers for your own survival.

Their accounts of helicopter combat at the height of the Vietnam conflict accurately recreate the sights and sounds of the battlefields, the fear and horror of watching close friends torn to pieces, their feelings on returning to base.

Their message is infinitely clear: 'The price of freedom is painful.' Endorsements"The story of the 191st Assault Helicopter Company's combat actions in Vietnam is one of heroism and dedication to duty.

It is a vivid picture of young American soldiers full of P and V and the 'want to' needed to get the job done with bullets flying in all directions.

An adrenaline rush is the order of the day. Read this book to gain new respect and admiration for the Vietnam-era veterans who fought in this unpopular war-they were truly magnificent!"-Brigadier General John C. "Doc" Bahnsen, Author of American Warrior: A Combat Memoir of Vietnam "An amazing story of perseverance and will.

The author accurately chronicles how the 191st Assault Helicopter Company was assembled, during the haste of the Vietnam buildup, with secondhand equipment and filler personnel to become a crown jewel among aviation units in battle.

A true testament of American mettle that we all still admire and envy."-COL Alan B.

Renshaw "This is a refreshing new perspective of the men inside the Hueys, who played such an important role in the conduct of the Vietnam War.

How frequently the victorious accounts of combat units in Vietnam failed to credit the pilots and crews who risked everything so ground forces could do their job.

Countless narratives mention these warriors only as inanimate objects. . . . This book speaks of the flesh and blood of those who flew those missions."-COL Paul Patton Winkel Jr. "A riveting firsthand account of a combat assault-helicopter company in Vietnam.

The book provides an invaluable number of Vietnam lessons learned, which flared up again in the more recent desert wars.

A must read for aviators and commanders of combat units."-COL FrancisW.

Matthews "The author brings you up close and personal to the human side of helicopter warfare and the heart-wrenching fears and pains felt by the pilots and crews.

A well-written account of how the tactical employment of airmobile assets can provide battlefield solutions as well as failures.

Honest rendition of some intelligence and communications failures that resulted in extensive collateral damage on assaulting forces.

Imagine yourself being one of the several sitting-duck ground targets receiving incoming small-arms fire while waiting for troops to load or unload.

Nobody leaves the LZ till the last ship is ready. Listen to the clatter of the M60 door guns and the music of the lumbering Charlie-model gunships close overhead, pouring welcomed suppressive fire into the hostile tree lines, allowing the slicks to escape once more . . . usually."-COL Dennis L. Butler