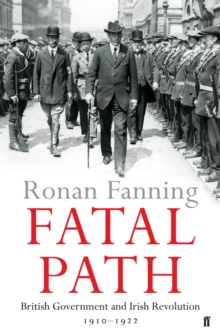 Faber and Faber
0571297412 / 9780571297412
eBook (EPUB)
941.50821
30/04/2013
Available
England
English
316 pages
Copy: 10%; print: 10%
Description based on print version record.
This is a magisterial narrative of the most turbulent decade in Anglo-Irish history: a decade of unleashed passions that came close to destroying the parliamentary system and to causing civil war in the United Kingdom. It was also the decade of the cataclysmic Great War, of an officers' mutiny in an elite cavalry regiment of the British Army and of Irish armed rebellion. It was a time, argues Ronan Fanning, when violence and the threat of violence trumped democratic politics. This is a contentious view. Historians have wished to see the events of that decade as an aberration, as an eruption of irrational bloodletting. And they have have been reluctant to write about the triumph of physical force. Fanning argues that in fact violence worked, however much this offends our contemporary moral instincts. Without resistance from the Ulster Unionists and its very real threat of violence the state of Northern Ireland would never have come into being. The Home Rule party of constitutionalist nationalists failed, and were pushed aside by the revolutionary nationalists Sinn Fein. Bleakly realistic, ruthlessly analytical of the vacillation and indecision displayed by democratic politicians at Westminster faced with such revolutionary intransigence,Fatal Pathis history as it was, not as we would wish it to be.