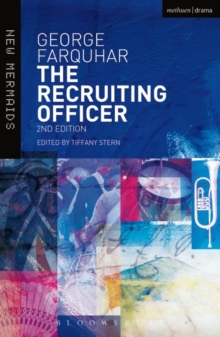 Farquhar's last two plays, "The Recruiting Officer" and "The Beaux' Stratagem", have been called 'the last worthwhile comedies of the Restoration tradition'.

Written during Farquhar's stint in Shrewsbury as part of a recruiting mission in 1704-5, "The Recruiting Officer" is a buoyant, whimsical piece stocked by a fairly conventional cast of characters: the rake-hero and his spirited lady (who dons breeches in the course of the action), his sober friend and the heroine's serious friend, the buffoon/coxcomb and his ill-fated amorous or heroic ventures.

What makes the play entertaining is Farquhar's light, humane touch; what makes it original is his depiction of a real-life provincial town and the impact that ongoing warfare (in this case the War of the Spanish Succession) had on its civilian society.