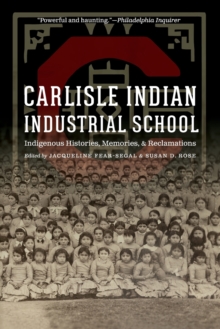 Part of the Indigenous Education series

The Carlisle Indian School (1879-1918) was an audacious educational experiment.

The result was that the last Indian war would be waged against Native children in the classroom. More than 8,500 children from virtually every Native nation in the United States were taken from their homes and transported to Pennsylvania.

Carlisle provided a blueprint for the federal Indian school system that was established across the United States and also served as a model for many residential schools in Canada.

The Carlisle experiment initiated patterns of dislocation and rupture far deeper and more profound and enduring than its founder and supporters ever grasped. Carlisle Indian Industrial School offers varied perspectives on the school by interweaving the voices of students' descendants, poets, and activists with cutting-edge research by Native and non-Native scholars.

These contributions reveal the continuing impact and vitality of historical and collective memory, as well as the complex and enduring legacies of a school that still affects the lives of many Native Americans.