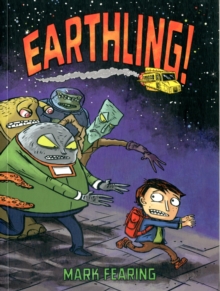 Every kid worries about making friends at a new school, but when nine-year-old Bud accidentally catches the wrong bus on his first day and finds himself launched into a far-away galaxy, making friends is the least of his problems!

Arriving at Cosmos Academy, deep in outer space, Bud soon learns from Principal Lepton that Earthlings are the most feared and hated creatures in the galaxy.

With the help of his new friend, Gort, Bud hides his true identity and tries to fit in by going undercover as an exchange student whose Uncle Spock can't take care of him while his dad works at the X-wing factory, and learning to play high-stakes anti-gravity ZeroBall (even though he's only ever been good at watching sports).

But with paranoid Principal Lepton threatening to expel (into outer space) any Earthlings, and nothing more than Gort's hacked Blip-computer to help them determine Earth's coordinates, will Bud ever find his way home?

Both gripping and hilarious, this dynamic graphic novel is perfect for kids who crave adventure with a sense of humor.