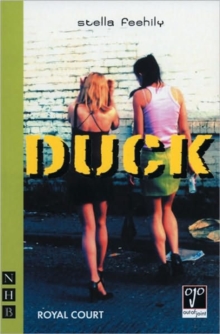 Edinburgh Festival debut for no-holds-barred play by new Dublin woman writer - directed by Max Stafford-Clark for Out of Joint.

Duck is both the nickname of the ultra-modern teenage girl at the heart of the play and a reference to the ancient practice of ducking suspected witches...Set in present-day Dublin, Duck follows the doings of Cat, in her late teens and temping as a nightclub hostess.

She tries to jolt-start her life by blowing up her boyfriend's car and hopping into bed with a fifty-year-old married man.

But for all her Sturm and Drang, she comes to realise that companionship with her best mate Sophie offer the best option after all...Premiered by one of the country's most prestigious theatre companies, Out of Joint, Duck opens at the Edinburgh Festival in August 2003 before touring the UK, playing at the Abbey Theatre during the Dublin Festival and finally at the Royal Court Theatre, London, in December. Duck is directed by Max Stafford-Clark, who ran the Royal Court Theatre from 1979-1993 and whose past productions include most of Caryl Churchill's work, the notorious Shopping and Fucking and the famous pairing of Our Country's Good and The Recruiting Officer.