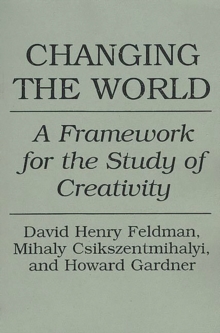 Changing the World : A Framework for the Study of Creativity

In this volume three of the key figures in the field set out to establish some parameters for the study of creativity.

After examining the earlier works on the subject, they present their current research findings, and then attempt to project where the field is likely to go in the decade ahead. Gardner, the proponent of biological aspects of creativity, ranges widely as he examines Freud's Vienna and the features of medicine that both constrained and challenged his revolutionary idea.

Csikszentmihalyi, with his exploration of genes and memes, examines individual issues as well as broader contextual concerns.

Feldman concentrates on the notions of coincidence and the transformational imperative.

These essays point to the rejuvenation of the field of creativity research, and suggest where the field is likely to move in the future.

This work is a major synthesis of value to advanced researchers as well as students and all those concerned with creativity.