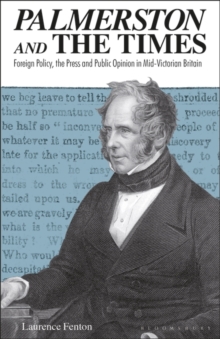 Palmerston and The Times : foreign policy, the press and public opinion in mid-Victorian Britain

Victorian Britain had two players of colossal influence on the world stage: Lord Palmerston, the dominant figure in foreign affairs in the mid-nineteenth century, and The Times, the first global newspaper, read avidly by statesmen around the world.

Palmerston was one of the first media-manipulating politicians of the modern age, forging close links with a number of publications to create the so-called 'Palmerston press'.

His relationship with The Times was more turbulent; it was a prolonged and bitter rivalry preceding eventual rapprochement during the Crimean War. Revealing the personal and political differences at the heart of an antagonism that stretched over the course of three decades, Laurence Fenton explores the highly charged rivalry between these two titans of the mid-Victorian era.

Focusing on the years from 1830 to 1865 when Palmerston was British Foreign Secretary and Prime Minister for a combined total of almost twenty-five years and when The Times, under the editorship of first Thomas Barnes and then John Delane, reached the zenith of its success, this was the period during which public interest in foreign affairs grew immeasurably, encompassing the tumultuous 'Year of Revolutions', the famous 'Don Pacifico' debate and the Crimean War.

Palmerston and The Times adds significantly to the understanding of the life and career of Lord Palmerston, in particular the relationship he enjoyed with the press and public opinion that was so vital to his incredibly long and multifaceted political career.

It also brings to light the remarkable men behind the success of The Times, paying fair tribute to their abilities while at the same time warning against the long-standing view of The Times as a paragon of newspaper independence in this era.

It will be essential reading for researchers of Victorian history and for anyone interested in the tumultuous relationship between politics and the press.