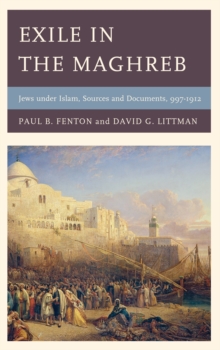 The Exile in the Maghreb entails the first attempt at describing the historical reality of the legal and social condition of the Jews in the Muslim countries of North Africa (principally Algeria and Morocco) over a thousand year period from the Middle Ages (997 C.E.) to the French colonization (1830 Algeria/1912 Morocco.).

The Exile is not a formal history but a chronological anthology of documents drawn from literary (section A) and archival sources (section B), many of which are published for the first time. In section A, Arabic and Hebrew chronicles, Muslim legal, and theological texts are followed by the accounts culled from European travelers-captives, diplomats, doctors, clerics, and adventurers.

Each document is introduced and annotated in such a way as to bring out its importance. The second section (B) reflects the diplomatic activity deployed by humanitarian organizations in favour of North African Jewry.

Spanning the 19th and early 20th centuries, these are mainly drawn from the archives of the Alliance Israelite Universelle (Paris) and the Anglo-Jewish Association (London).

The documents are richly elucidated with illustrations taken from the international press.

The book presents a new and illuminating insight into the status of Jews under the Crescent.

The Jews of North Africa were the only minority under Islam, in this region and their history reflects Judaism's exclusive encounter with Islam.