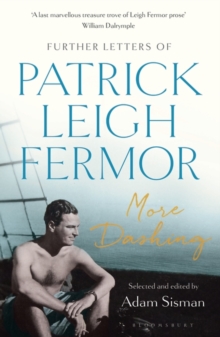 This second volume, More Dashing, presents a further selection of letters that exude a zest for life and adventure characteristic of the man known to all as `Paddy'.

Paddy's exuberant letters contain glimpses of the great and the good: a chance conversation with the Foreign Secretary, Anthony Eden, when Paddy opens the wrong door, or a glass of ouzo under the pine trees with Harold Macmillan.

They describe encounters with such varied figures as Jackie Onassis, Camilla Parker-Bowles, Oswald Mosley and Peter Mandelson, while also relating adventures with the humble: a `pick-nick' with the stonemasons at Kardamyli, or a drunken celebration in the Cretan mountains with his old comrades from the Resistance, most of them simple shepherds and goatherds.

Paddy was at ease in any company - unfailingly charming, boyish, gentle and fun. Patrick Leigh Fermor has long been recognised as one of the greatest travel writers of his time.

Nowhere is his restless curiosity and delight in language more dazzlingly displayed than in his letters, skilfully edited in this collection by Adam Sisman.