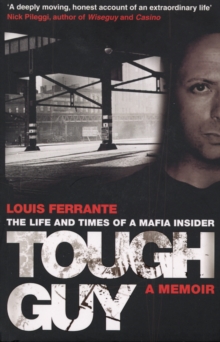 Louis Ferrante was a young rogue who made his reputation on the streets of New York and later hooked up with the infamous John Gotti Jr and the Gambino crime family.

He pulled off some of the most lucrative robberies in US history, many of which are still unsolved.

For Lou, life was sweet, and most of the time he had fun wisecracking his way around town and staying one step ahead of the law.

When the law finally caught up with Louis, he faced a long stretch in some of the most notoriously dangerous penitentiaries and ended up living amongst the most violent, not to mention insane, criminals incarcerated in the US prison system. But life became more tolerable when, almost by accident, Louis read his first book and quite unexpectedly a new world opened up to him - a world which offered him a sanctuary from the brutal chaos of his everyday existence.

During the course of his eight years in prison, he read everything from Danielle Steel to Caesar's Gallic Wars; he learned the art of writing and studied the major religions, eventually choosing to become an Orthodox Jew. And with only limited access to law books, he somehow managed to successfully appeal his own conviction and win his freedom.

Gritty, hard-hitting, and yet so often hilarious, Louis Ferrante's memoir is a poignant and incredibly moving slice of life from the insider's point of view, written in the bestselling tradition of Nicholas Pileggi's Goodfellas, Wiseguys and The Sopranos.