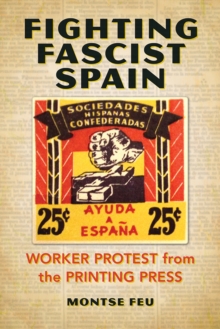 In the 1930s, anarchists and socialists among Spanish immigrants living in the United States created Espana Libre (Free Spain) as a response to the Nationalist takeover in their homeland.

Worker-oriented and avowedly antifascist, the grassroots periodical raised money for refugees and political prisoners while advancing left-wing culture and politics.

Espana Libre proved both visionary and durable, charting an alternate path toward a modern Spain and enduring until democracy's return to the country in 1977.

The periodical emerged as part of a transnational effort to link migrants and new exiles living in the United States to antifascist networks abroad.

In addition to showing how workers' culture and politics shaped their antifascism, Feu brings to light creative works that ranged from literature to satire to cartoons to theater.

As Espana Libre opened up radical practices, it encouraged allies to reject violence in favor of social revolution's potential for joy and inclusion.