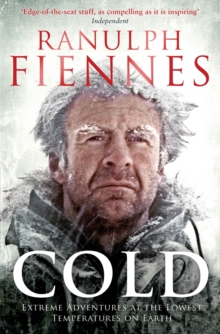 Cold : extreme adventures at the lowest temperatures on Earth

There are only few human beings who can adapt, survive and thrive in the coldest regions on earth. And below a certain temperature, death is inevitable.

Sir Ranulph Fiennes has spent much of his life exploring and working in conditions of extreme cold.

The loss of many of his fingers to frostbite is a testament to the horrors man is exposed to at such perilous temperatures.

With the many adventures he has led over the past 40 years, testing his limits of endurance to the maximum, he deservedly holds the title of 'the world's greatest explorer'.

Despite our technological advances, the Arctic, the Antarctic and the highest mountains on earth, remain some of the most dangerous and unexplored areas of the world.

This remarkable book reveals the chequered history of man's attempts to discover and understand these remote areas of the planet, from the early voyages of discovery of Cook, Ross, Weddell, Amundsen, Shackleton and Franklin to Sir Ranulph's own extraordinary feats; from his adventuring apprenticeship on the Greenland Ice Cap, to masterminding over the past five years the first crossing of the Antarctic during winter, where temperatures regularly plummeted to minus 92C.

Both historically questioning and intensely personal, Cold is a celebration of a life dedicated to researching and exploring some of the most hostile and brutally cold places on earth.