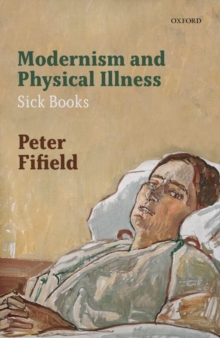 T. S. Eliot memorably said that separation of the man who suffers from the mind that creates is the root of good poetry.

This book argues that this is wrong. Beginning from Virginia Woolf's 'On Being Ill', it demonstrates that modernism is, on the contrary, invested in physical illness as a subject, method, and stylizing force.

Experience of physical ailments, from the fleeting to the fatal, the familiar to the unusual, structures the writing of the modernists, bothas sufferers and onlookers.

Illness reorients the relation to, and appearance of, the world, making it appear newly strange; it determines the character of human interactions and models of behaviour.

As a topic, illness requires new ways of writing and thinking, altered ideas of the subject, and are-examination of the roles of invalids and carers.

This book reads the work five authors, who are also known for their illness, hypochondria, or medical work: D.

H. Lawrence, Virginia Woolf, T. S. Eliot, Dorothy Richardson, and Winifred Holtby. It overturns the assumption that illness is a simple obstacle to creativity and instead argues that it is a subject of careful thought and cultural significance.