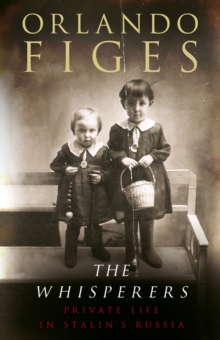 Drawing on a huge range of sources - letters, memoirs, conversations - Orlando Figes tells the story of how Russians tried to endure life under Stalin, brilliantly conveying the reality of their terrible choices.

Soviet history has generally been seen either as a story of a political system or the story of its victims. "The Whisperers" is about Russians from across the whole range of experience under Stalin.

Those who shaped the political system became, very frequently, its victims.

Those who were its victims were frequently quite blameless. "The Whisperers" recreates the sort of maze in which Russians found themselves, where an unwitting wrong turn could either destroy a family or, perversely, later save it; a society in which everyone spoke in whispers: whether to protect themselves, their families, neighbours or friends - or to inform on them.

This is Figes' masterpiece. It is both a gripping and emotional account of lives lived in impossible times and a remarkable example of the power and value of writing history.