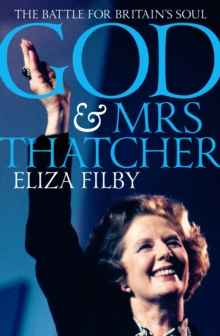 This wide-ranging and extensively researched book, which draws on previously undiscovered archives, interviews and memoirs, offers a radical new perspective on the interrelationship between religion and politics in Britain's secular age, revealing how Britain created Margaret Thatcher and, ultimately, how Margaret Thatcher recreated Britain.

Few people are aware that Margaret Thatcher was a devout Christian or that she was a preacher before she was a politician.

As a child, she would sit in the pews listening to her lay-preacher father, Alf Roberts, hammer home sermons on the Protestant work ethic, God-given liberty and the sanctity of the individual.

As her father's archives reveal, it was in the pulpit of Finkin Street's Wesleyan Chapel in Grantham where Thatcherism was born.

When Thatcher recited the prayer of St Francis of Assisi on the steps of No 10, it signaled a new era of conviction politics.

Thatcher's rise coincided with the rebirth of the Christian right in Britain committed to wresting the moral mantel from socialism and elevating the market as the true godly path.One institution which did not share this outlook, however, was the Church of England which doggedly defended the Christian origins of Britain's social democracy and condemned the selfish individualism and rampant materialism being let loose in the name of enterprise culture. Margaret Thatcher may have set out to reinvigorate the nation with the non-conformist values of her father, but in the end she created a country that was not more Christian, but more secular; and not more devout, but entirely consumed by a new religion: capitalism.

In upholding the sanctity of the individual, Thatcherism inadvertently signaled the death of Christian Britain.