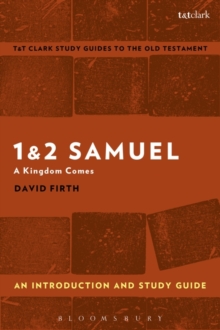 Scholarly study of Samuel continues to wrestle with how we interpret this pivotal text.

Even such basic matters as the question of what kind of literature it is remain unresolved while older questions such as the nature of its text and sources are debated anew in the light of material from Qumran and of current approaches to Hebrew narrative. Recognizing the importance of questions such as these, David Firth explores and introduces fresh ways of reading Samuel as a unified and yet complex text, which displays high levels both of literary artistry and of theological commitment. Although some stories in the books of Samuel are well known, and in the case of David and Goliath even proverbial, much of the content of these books is strange to modern readers.

It is a story about a woman wanting a child, for example, that relates the beginnings of monarchy within Israel.

Even the question of the monarchy is problematic, for we are introduced to not one royal family but two-those of Saul and David.

David is ultimately shown to be the king chosen by God, yet by the end of the book he is only just managing to hold on to the kingdom as it is nearly torn from him by rivalries within his family.

These arresting stories are perplexing, for Samuel's writers seldom tell us how to read and interpret them.

Firth presents these complex and fascinating stories as part of a bigger picture, enabling students to chart their way through the literary and historical issues of the Samuel narrative.

Firth addresses issues of historicity, sources, date and authorship, as well as -- crucially -- appreciating the text as a literary whole.