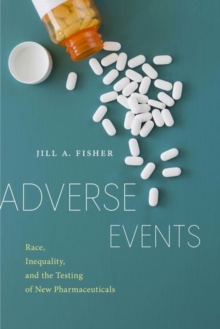 Adverse Events : Race, Inequality, and the Testing of New Pharmaceuticals

Part of the Anthropologies of American Medicine: Culture, Power, and Practice series

Explores the social inequality of clinical drug testing and its effects on scientific resultsImagine that you volunteer for the clinical trial of an experimental drug.

The only direct benefit of participating is that you will receive up to $5,175.

You must spend twenty nights literally locked in a research facility.

You will be told what to eat, when to eat, and when to sleep.

You will share a bedroom with several strangers. Who are you, and why would you choose to take part in this kind of study?

This book explores the hidden world of pharmaceutical testing on healthy volunteers.

Drawing on two years of fieldwork in clinics across the country and 268 interviews with participants and staff, it illustrates how decisions to take part in such studies are often influenced by poverty and lack of employment opportunities.

It shows that healthy participants are typically recruited from African American and Latino/a communities, and that they are often serial participants, who obtain a significant portion of their income from these trials.

This book reveals not only how social inequality fundamentally shapes these drug trials, but it also depicts the important validity concerns inherent in this mode of testing new pharmaceuticals.

These highly controlled studies bear little resemblance to real-world conditions, and everyone involved is incentivized to game the system, ultimately making new drugs appear safer than they really are.

Adverse Events provides an unprecedented view of the intersection of racial inequalities with pharmaceutical testing, signaling the dangers of this research enterprise to both social justice and public health.