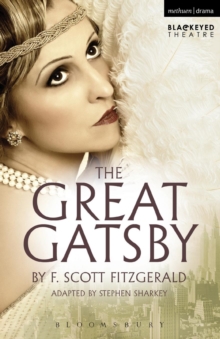 Mercurial Jay Gatsby's destructive passion for Daisy Buchanan is played out against the background of Long Island high society.

Viewed through the eyes of an outsider, Gatsby's life is the story of a generation - glitz and glamour turning sour, and the high life turning to ashes. Immersing you in the decadence of America's Jazz Age, The Great Gatsby is brought to life in this sizzling new stage adaptation.

Recreating the sights, sounds and feel of America's 'Roaring Twenties' as seen through the eyes of Nick Carraway, F.

Scott Fitzgerald's masterpiece is a brilliant evocation of a society obsessed with wealth and status. This masterful adaptation by Stephen Sharkey was first published to coincide with the premiere and national tour by Blackeyed Theatre, opening in September 2015.