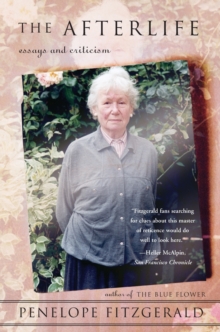 The Afterlife : Essays and Criticism

From the late novelist and biographer Penelope Fitzgerald, a collection of essays-almost all of them unknown to her countless American admirers-on books, travel, and her own life and work.. "A good book," wrote John Milton, "is the precious life-blood of a master-spirit, embalmed and treasured up on purpose to a life beyond life." In this generous posthumous collection of her literary essays and reviews, Penelope Fitzgerald celebrates the "life beyond life" of dozens of master-spirits--their afterlife not only in the pages of their works but in the minds of their readers, critics, and biographers.

Here too are reviews of several late-twentieth-century literary biographies, including Richard Holmes's Coleridge, A.

N. Wilson's C. S. Lewis, and Martin Stannard's Evelyn Waugh-reviews that together form a memorable criticism both of life and the art of life-writing. And here especially are extended explorations of "minor" figures, the creators of modest, overlooked, but fully achieved imaginative works, the celebration of which reveals so much about Penelope Fitzgerald's own artistic sensibility.

Among these are Charlotte Mew, "who was completely successful perhaps only two or three times, though that is enough for a lyric poet"; William Morris, the consummate craftsman who, in life as in art, was determined to do "nothing shabby"; and the cartoonists and humorists of Punch, the comic weekly of which her father, "Evoe" Knox, was for many years the editor.

She confesses she admires wit, values personal and artistic courage, and feels drawn "to whatever is spare, subtle, and economical." Rounded out by travel writings, bits of autobiography, and essays on the craft of fiction, The Afterlife is one of the most engaging books about books since Virginia Woolf's The Common Reader. As the critic Hermione Lee says in an appreciative introduction, in each of these "wonderfully sympathetic, curious, and knowledgeable pieces, Penelope Fitzgerald leads us right to the heart of the matter-the feeling of a novel, the nature of a life, the understanding of how something or someone works, the sense of a place or a time"-and does so with brevity, justice, humor, grace, and style.