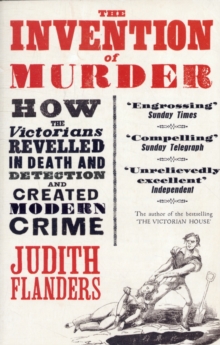 The invention of murder : how the Victorians revelled in death and detection and created modern crime

'We are a trading community, a commercial people. Murder is doubtless a very shocking offence, nevertheless as what is done is not to be undone, let us make our money out of it.' Punch Murder in the 19th century was rare.

But murder as sensation and entertainment became ubiquitous - transformed into novels, into broadsides and ballads, into theatre and melodrama and opera - even into puppet shows and performing dog-acts. In this meticulously researched and compelling book, Judith Flanders - author of 'The Victorian House' - retells the gruesome stories of many different types of murder - both famous and obscure.

From the crimes (and myths) of Sweeney Todd and Jack the Ripper, to the tragedies of the murdered Marr family in London's East End, Burke and Hare and their bodysnatching business in Edinburgh, and Greenacre who transported his dismembered fiancee around town by omnibus. With an irresistible cast of swindlers, forgers, and poisoners, the mad, the bad and the dangerous to know, 'The Invention of Murder' is both a gripping tale of crime and punishment, and history at its most readable.