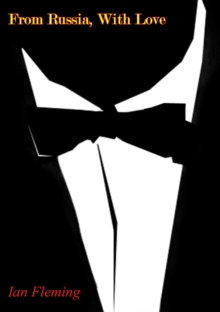 From Russia, With Love

MURDER ON THE ORIENT EXPRESSThe Russians wanted to liquidate James Bond-ace British secret agent-in a way that would embarrass England.

So they lined up their best team to pull off the job!Tatiana Romanova-an alluring brunette seductress who looks like Garbo although her heart belongs to the State.Red Grant-a renegade Irish hired assassin, who likes to kill for kicks.Rosa Klebb-head of Otydel II, department of torture and death, a hideous woman with a lust for inflicting excruciating torment.The master conspirators devise a trap designed to eliminate Bond on a perilous journey from Istanbul to Paris via the lush Orient Express.

A trip on which Bond makes passionate love to one of his captors as he fights desperately to protect his life from the others, while the train speeds towards its ultimate, awful rendezvous with death!JAMES BOND becomes the target of theRUSSIAN MURDER ORGANIZATION, SMERSH...The deadly and sinister SMERSH sets a trap to catch and kill James Bond, ace British spy with a weakness for women and wine, and they bait it with a beautiful brunette.

But they don't count on her falling in love with her victim...after she has seduced him!!&quoteOne of the most outrageously entertaining thrillers ever contrived.&quote-New York World Telegram and Sun.