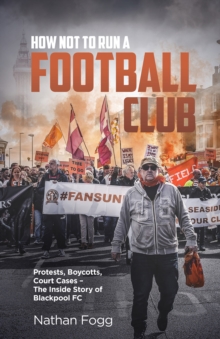 How not to run a football club : protests, boycotts, court cases and the story of how Blackpool fans fought to save their club

On a sweltering day in May 2010, Blackpool achieved the impossible dream.

The Seasiders booked their ticket to the Premier League in a thrilling play-off final win, with all the riches that came with it.

Twenty-four hours later, while everybody else was celebrating, the Oystons were meeting to plan how they would take it.

Ian Holloway and his side fought bravely for survival, becoming the nation's second team with their swashbuckling style.

Behind the scenes, the club was falling apart. Buckets collected rain leaking through the training ground roof.

The manager's office could have the heat or lights on, just not at the same time.

The Oystons paid themselves nearly GBP30m. It took five years for Blackpool to suffer three relegations back to the basement of the Football League.

When fans hit back, they were sued. Chairman Karl Oyston told a fan he was on a 'never ending revenge mission'.

How Not to Run a Football Club is the inside story of how one family nearly ran a football club to its death. And how a community brought it back.