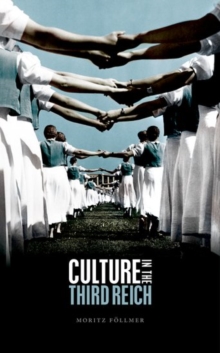 Culture in the Third Reich

'It's like being in a dream', commented Joseph Goebbels when he visited Nazi-occupied Paris in the summer of 1940.

Dream and reality did indeed intermingle in the culture of the Third Reich, racialist fantasies and spectacular propaganda set-pieces contributing to this atmosphere alongside more benign cultural offerings such as performances of classical music or popular film comedies.

A cultural palette that catered to the tastes of the majority helped encourage acceptance of the regime.

The Third Reich was therefore eager to associate itself with comfortable middle-brow conventionality, while at the same time exploiting the latest trends that modern mass culture had to offer. And it was precisely because the culture of the Nazi period accommodated such a range of different needs and aspirations that it was so successfully able to legitimize war, imperial domination, anddestruction. Moritz Foellmer turns the spotlight on this fundamental aspect of the Third Reich's successful cultural appeal in this ground-breaking new study, investigating what 'culture' meant for people in the years between 1933 and 1945: for convinced National Socialists at one end of the spectrum, via the legions of the apparently 'unpolitical', right through to anti-fascist activists, Jewish people, and other victims of the regime at the other end of the spectrum.

Relating the everyday experienceof people living under Nazism, he is able to give us a privileged insight into the question of why so many Germans enthusiastically embraced the regime and identified so closely with it.