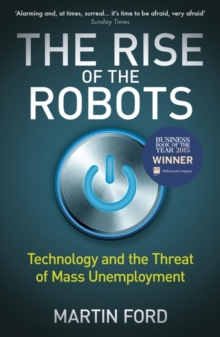 The rise of the robots : technology and the threat of mass unemployment

Intelligent algorithms are already well on their way to making white collar jobs obsolete: travel agents, data-analysts, and paralegals are currently in the firing line.

In the near future, doctors, taxi-drivers and ironically even computer programmers are poised to be replaced by 'robots'.

Without a radical reassessment of our economic and political structures, we risk the very implosion of the capitalist economy itself. In The Rise of the Robots, technology expert Martin Ford systematically outlines the achievements of artificial intelligence and uses a wealth of economic data to illustrate the terrifying societal implications.

From health and education to finance and technology, his warning is stark - all jobs that are on some level routine are likely to eventually be automated, resulting in the death of traditional careers and a hollowed-out middle class.

The robots are coming and we have to decide - now - whether the future will bring prosperity or catastrophe.