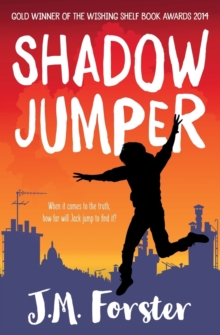 Shadow Jumper is winner of the Gold Award in the Wishing Shelf Book Awards 2014.

A thrilling mystery adventure with contemporary themes, for children aged 10 and above.

The truth is out there somewhere ...but how far will Jack jump to find it?

Jack Phillips's allergy to sunshine confines him to the shadows, leaving him lonely and at risk of life-threatening burns every time he steps into the light.

Shadow jumping on the rooftops at dusk makes him feel alive. And free. But Jack's condition is suddenly worse than ever and only his missing scientist dad can save him.

As Jack and his new friend, Beth, begin their frantic search and delve into his dad's past for clues, they have no idea what they are about to uncover.

Shocking rumours and dark secrets bombard them at every turn.

Shadow Jumping takes courage. But when it comes to the truth, will Jack be brave enough to face it?