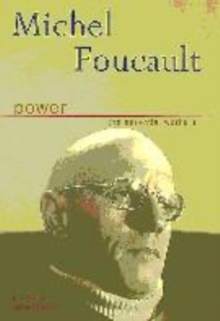 "The Essential Works of Foucault 1954-1984" is the definitive collection of Michel Foucault's articles, interviews and seminars.

Selected from the French "Dits et ecrits", whose publication was hailed as a major intellectual event, the "Essential Works" is a collection of Foucault's written and spoken words outside his published monographs."Power", the third and final volume, brings together Foucault's contributions to the practice of political analysis.

Foucault was a courageous, ingenious and creative political actor and thinker.

This volume assembles writings and interviews on the questions of power and the political from the last 12 years of his life, during which he became an increasingly important public voice.

In what ways can reason and rationality create social order by coercively excluding those people of disordered and unreasonable conduct?

What is the role of the "truth-teller"? How should intellectuals and citizens deal with holders of governmental power?With many of these lectures, articles and interviews unavailable in English until now, this volume brings a new sense of the breadth of Foucault's work, emphasizing in particular Foucault's practical concern with discrimination, coercion and exclusion in human society.