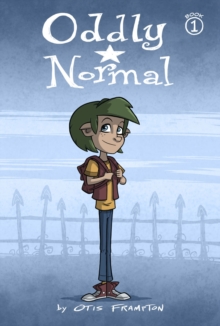 "The text contains some sophisticated vocabularyand literary references (there is a vampire named Bram, for instance), whileremaining accessible.

The drawings throughout are engaging and make good use of moody,saturated colors.

A recreation of an Oddly Normal collection published in2006 that expands upon the original story and has reimagined illustrations. VERDICT This is Frampton's fully realized vision for Oddly Normal; it isworth adding to any collection, even those that already contain the earlieredition." - School Library Journal "Frampton's art is refreshingly quirky,with strong lines and bold use of color.

The world he creates is full of fun andwhimsy, and kids will easily relate to Oddly's struggle to become comfortable inher own skin.

This will quickly become a favorite among comics fans." -Booklist Meet OddlyNormal, a ten-year-old girl with pointed ears and green hair - a half-witch whowill be the first to tell you that having a mother from a magical land calledFignation, also known as the Wicked Witch of the West and a father from Earthdoesn't make it easy to make friends at school!

On her tenth birthday, she blowsout the candles on her birthday cake and makes a disastrous wish.

Now, Oddlymust travel to Fignation to uncover the mystery of her parents' disappearance. Join Oddly as she navigates a strange new school, teenage angst, monstrousbullies, and Evil itself on an unforgettable fantasy adventure through thevibrant world of Fignation in Oddly Normal. "A charming andrelatable fish-out-of-water tale." -- Hope Larson, A Wrinkle in Time: TheGraphic Novel