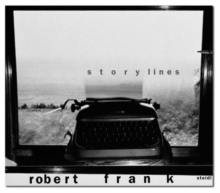 Robert Frank is one of the most influential of all post-war photographers.

Pioneering a revolutionary approach to photography and filmmaking, he combines autobiographical and poetic elements to produce straight black and white images that transcend the specific.

Speaking of universal experience, "I'm trying to forget easy photo, trying to make something from within," he has said, "time moves on and never stops or waits." Often involving a progression through a series of images, his work is structured like a musical sequence, creating storylines that resonate beyond the frozen moment of any single photograph.

Storylines accompanies an exhibition highlighting Frank's experimental use of narrative in photography and film.

The exhibition and book will include work from his films and photographs (including Polaroids, contact sheets and recent digital stills) and several artist's books.

The photographs are from locations as distant as Peru, London, Wales, Coney Island and Chicago.