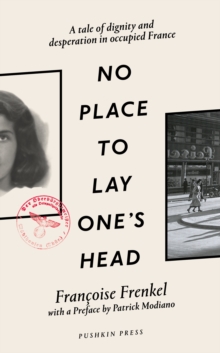 No place to lay one's head

By: Frenkel, Francoise,  Smee, Stephanie(Translated by)

In 1921, Francoise Frenkel - a Jewish woman from Poland - opens her first bookshop in Berlin.

It is a dream come true. The dream lasts nearly two decades. Then suddenly, it ends. It ends after police confiscations and the Night of Broken Glass, as Jewish shops and businesses are smashed to pieces.

It ends when no one protests. So Francoise flees to France, just weeks before war breaks out.

In Paris, on the wireless and in the newspapers, horror has made itself at home.

When the city is bombed, Francoise seeks refuge in Avignon, then Nice.

She fears she may never see her family again. Nice is awash with refugees and terrible suffering; children are torn from their parents; mothers throw themselves under buses.

Horrified by what she sees, Francoise goes into hiding.

She survives only because strangers risk their lives to protect her. Set against the romantic landscapes of Southern France, No Place to Lay One's Head is a heartbreaking tale of human cruelty and unending kindness; of a woman whose lust for life refuses to leave her, even in her darkest hours.