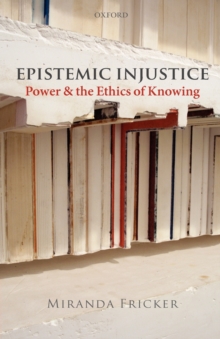 Epistemic injustice : power and the ethics of knowing

Epistemic Injustice explores the idea that there is a distinctively epistemic kind of injustice - injustice which consists in a wrong done to someone specifically in their capacity as a knower.

Testimonial injustice occurs when prejudice causes a hearer to give a deflated level of credibility to a speaker's word; as in the case where the policedo not believe someone because he is black.

Hermeneutical injustice, by contrast, occurs when a gap in collective interpretative resources puts someone at an unfair disadvantage when it comes to making sense of their social experiences.

A central case of this sort of injustice is found in the example of awoman who suffers sexual harassment prior to the time when we acquired this critical concept, so that she cannot properly comprehend her own experience, let alone render it communicatively intelligible to others.

In connection with each of these forms of epistemic injustice, Fricker develops the idea that our testimonial sensibility needs to incorporate a corrective, anti-prejudicial virtue that can be used to promote a more veridical and a more democratic epistemic practice.

Epistemology as it has traditionally been pursued has been impoverished by the lack of any theoretical framework conducive to revealing the ethical and political aspects of our epistemic conduct.

Epistemic Injustice shows that virtue epistemology provides a general epistemological idiom in which these issues can be fruitfully and forcefully discussed.