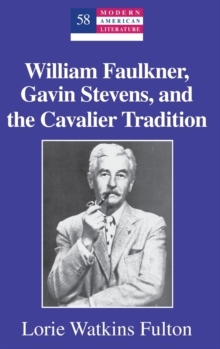 Many readers imagine Gavin Stevens as the character most similar to William Faulkner in all of his apocryphal Yoknapatawpha, and while Stevens was once considered the most reliable Faulknerian spokesperson, ample scholarship has demonstrated that he functions as far more than merely the author's mouthpiece.

In William Faulkner, Gavin Stevens, and the Cavalier Tradition, Lorie Watkins Fulton defines Stevens's role and examines the scope of his influence.

Fulton proposes that Faulkner uses similarities between himself and Stevens to voice, at a fictional remove, concerns about people of his own class and even of his own ancestry.

Ultimately, she suggests that Stevens's manipulations of the law, his misunderstanding of human beings, and his rhetorically high-minded pursuit of "not so much truth as of justice, or of justice as he sees it" remove him ideologically only a degree or two away from the most terrifying dictators of the twentieth century.