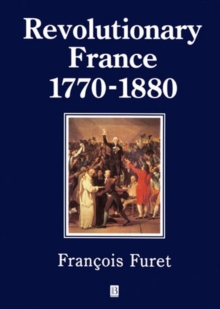 Part of the History of France series

This is an account of 110 years of turbulence and change.

At the offset there were not one, but two revolutions: by intent the first was egalitarian, the second - Bonaparte's - authoritarian.

The tension between the two characterized the period and shaped the Republic that in the end emerged from the ruins of the Ancient Regime.

The narrative begins in the last years of Louis XVI.

The sovereignty of the people was as absolute as the monarchy it replaced, and the Terror was its tragic and inevitable consequence.In 1799, after a well planned and executed military coup, Bonaparte seized power and within five years had made himself France's first emperor.

Napoleon conquered not only half of Europe but the aspirations of the Revolution, and put in place the laws and institutions by which France is still largely governed.

Yet the Revolutionary ideology of liberty and equality survived Napoleon and two restorations of the monarchy, reemerging in the popular uprisings of 1830, 1848 and 1871, and finally finding constitutional expression in the Third Republic of 1871. Revolutionary France is a vivid narrative history.

It is also a radical reinterpretation of the period, and testimony to the power both of ideas and of personality in movements of the past.