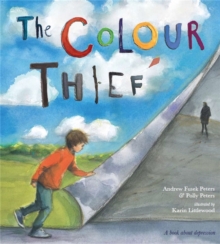 The colour thief : a family's story of depression

The colour thief : a family's story of depression

The Colour Thief is a simple, heart-warming tale which helps to open up the conversations around depression and to support young children whose families have been affected.

We follow a young boy who loves spending time with his dad, doing fun things together.

When his father becomes sad and distant, he doesn't understand and believes he has done something to make his dad so, despite being told otherwise. Time passes and his father begins to get happier again and they have fun together like before. Narrated from the child's perspective and illustrated with beautiful pictures by the award-winning artist Karin Littlewood, this is the perfect book to read with children aged 7-9 years old who are trying to understand the cause and effects of depression, and reassure them that depression passes and their parents are not lost to them. 'It's crucial kids learn about depression; that it's nothing to feel ashamed about and they are not alone - one fourth of the world knows what it feels like.

It's going to be them that break the stigma, not us.' Ruby Wax'This book brings freshness and vibrancy into a world often portrayed as dark and hidden, and it can help take away the feelings of helplessness and fear that can make families feel so alone.' Marjorie Wallace CBE, Hon FRC Psych, Founder of SANE. 'Vividly depict[s] a young boy's reaction to his father's depression... it's worth sharing this clever and heartfelt book with the kids in your life.' - Elise Moon (6) and Nick Moon (42), Kent - Single Step Magazine