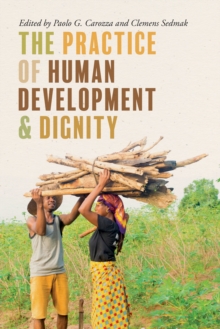 The Practice of Human Development and Dignity

Part of the Kellogg Institute Series on Democracy and Development series

Although deeply contested in many ways, the concept of human dignity has emerged as a key idea in fields such as bioethics and human rights.

It has been largely absent, however, from literature on development studies.

The essays contained in The Practice of Human Development and Dignity fill this gap by showing the implications of human dignity for international development theory, policy, and practice.

Pushing against ideas of development that privilege the efficiency of systems that accelerate economic growth at the expense of human persons and their agency, the essays in this volume show how development work that lacks sensitivity to human dignity is blind.

Instead, genuine development must advance human flourishing and not merely promote economic betterment.

At the same time, the essays in this book also demonstrate that human dignity must be assessed in the context of real human experiences and practices.

It asks not only "what is dignity" but also "how can dignity be done?"Through a unique multidisciplinary dialogue, The Practice of Human Development and Dignity offers a dialectical and systematic examination of human dignity that moves beyond the current impasse in thinking about the theory and practice of human dignity.

It will appeal to scholars in the social sciences, philosophy, and legal and development theory, and also to those who work in development around the globe. Contributors: Paolo G. Carozza, Clemens Sedmak, Severine Deneulin, Simona Beretta, Dominic Burbidge, Matt Bloom, Deirdre Guthrie, Robert A.