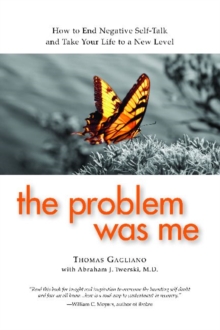 The Problem Was Me : How to End Negative Self-Talk and Take Your Life to a New Level

The Father's Day message in this book is loud and clear: As parents we are our children's first heroes, whether we want the responsibility or not.

One of the most powerful messages I ever received came from my nine year old son.

While watching a baseball game on television, my son asked me why the kids in the stands were so excited.

I said some baseball players are heroes to the children.

I suggested that someday one of those players might be his hero.

My son paused and said to me, "They may be my hero someday, but you will always be my first hero." I was so touched, I could not reply.

As parents we are our children's first heroes, whether we want the responsibility or not.-excerpt from page 42 from The Problem Was Me Author Tom Gagliano shares his insights on healing from destructive behaviors and finding peace and spirituality.

The book includes tools that he gained while recovering from his own personal struggle with negative and compulsive behavior.

According to Gagliano and his co-author, Abraham Twerski, many of the common problems people face are brought on by unhealed childhood wounds.

Throughout the book, Gagliano provides some very candid examples of how some of his childhood experiences resulted in unresolved feelings: "I never accepted criticism well.

Whenever someone disagreed with me, I'd get defensive.

It felt like I was being ridiculed. I am still dealing with childhood wounds and insecurity.

Although my wife loved me very much, I did not love myself.

By failing to accept my own weaknesses, I could not allow myself to be loved by anyone.

I felt undeserving of that love." This is an example of a psychological maneuver called transference, according to Dr. Twerski, who states, "A person may transfer feelings that were appropriate toward person A to person B." Gagliano further explains how he sought treatment to gain control over the little voice inside his head that was always telling him that he did not deserve to be happy - which he refers to as "the warden." According to Gagliano, the warden is a powerful force that sabotages lives by encouraging destructive behaviors, such as addictive behaviors, and discouraging happiness and healing.

This book is certainly very suitable for those who are battling addictions, since as the author points out: "Some addicts who have been sober for a long time may continue to lead tormented, angry lives." The author shares applicable case studies and helpful tips and suggestions throughout the book, including: how to get the most out of a support group; help for struggling couples; how to conduct a personal self-examination by taking personal inventories; and how to reconnect with one's parents.

However, it should not be written off as a book simply for those who are suffering from addiction, as it has a much broader application.

In the introduction, the author includes a list of questions the reader should ask him or herself to determine whether or not this book could be of help.

Basically, this book could be helpful to anyone who wants to break the cycle of self-defeating thoughts and self-destructive behaviors.