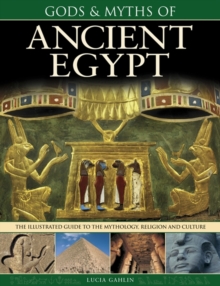 Gods & myths of Ancient Egypt : the illustrated guide to the mythology, religion and culture

This is an illustrated guide to the mythology, religion and culture.

It is a scholarly yet accessible celebration of ancient Egypt for every reader: pyramids, magic, rituals, mummies, pharaohs, dreams and oracles.

It examines the role myths and religion in the development of one of the most studied periods of history.

It describes the elaborate preparations for the afterlife, including burial rituals, symbolic funerary offerings and ceremonies for the dead.

It features over 370 photographs, maps, diagrams and facsimiles bring ancient Egypt's rich past to life.

Egypt's cultural heritage is vast, and the story of this ancient civilization has captured our imagination.

It introduces the gods and goddesses of Egypt, describes their characters and identifying features, the myths surrounding them, and their role in the creation of society. Quotations from books, hymns, prayers and hieroglyphic paintings give an authentic picture of culture and society, and maps, chronologies and artworks supplement the photographs in this masterly history.