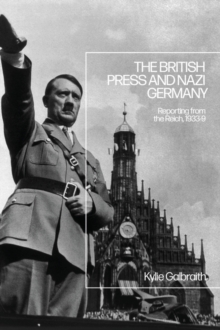 The British press and Nazi Germany : reporting from the Reich, 1933-39

What was known and understood about the nature of the Nazi dictatorship in Britain prior to war in 1939?

How was Nazism viewed by those outside of Germany? The British Press and Nazi Germany considers these questions through the lens of the British press. Until now, studies that centre on British press attitudes to Nazi Germany have concentrated on issues of foreign policy.

The focus of this book is quite different. In using material that has largely been neglected, Kylie Galbraith examines what the British press reported about life inside the Nazi dictatorship.

In doing so, the book imparts important insights into what was known and understood about the Nazi revolution. And, because the overwhelming proportion of the British public's only means of news was the press, this volume shows what people in Britain could have known about the Nazi dictatorship.

It reveals what the British people were being told about the regime, specifically the destruction of Weimar democracy, the ruthless persecution of minorities, the suppression of the churches and the violent factional infighting within Nazism itself. This pathbreaking examination of the British press' coverage of Nazism in the 1930s greatly enhances our knowledge of the fascist regime with which the British Government was attempting to reach agreement at the time.