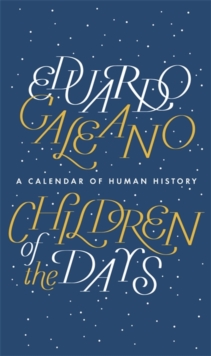 Children of the days : a calendar of human history

From Eduardo Galeano, one of Latin America's greatest living writers, author of the Memory of Fire trilogy, comes Children of the Days a new kind of history that shows us how to remember and how to liveThis book is shaped like a calendar.

Each day brings with it a story: a journey, feast or tragedy that really happened on that date, from all possible years and all corners of the world.

From Abdul Kassem Ismail, the tenth-century Persian who never went anywhere without his library - all seventeen thousand books of it, on four hundred camels; to the Brazilian city of Sorocaba, which on February 8 1980 responded to the outlawing of public kissing by becoming one huge kissodrome; to July 1 2008, the day the US government decided to remove Nelson Mandela's name from its list of dangerous terrorists, Children of the Days takes aim at the pretensions of official history and illuminates moments and heroes that we have all but forgotten.

Through this shimmering historical mosaic runs a common thread, one that joins humanity's darkest hours to its sweetest victories.

Children of the Days is the story of our lives. 'Eduardo Galeano is the great master of fragments and splinters, a prince of the absurdly truthful.

Children of the Days, his Calendar of Human History, is an immensely varied gathering of facts and oddments and truths and stories of every kind.

Underlying them all is a passionate and humane concern for the underdog, the poor, the forgotten.

How this can be so funny and at the same time so moving is a great mystery' Philip Pullman'Bedtime stories, you remember?

This is a book of stories for each day of the year, addressed to adults.

Stories of the historical human venture. Each story half a page. Put it beside your bed and the bed of those you love' John Berger'Marries meticulous journalistic detail with lyrical flair ...

Comprises 365 vignettes that range from the birth of Chekhov (January 29) - "He wrote as if he were saying nothing. And he said everything" - to The Saddest Match in History (November 21).

But where to start? On QI, Alan Davies might pick January 1, the first day of the year.

It's where Galeano begins too, but only so his inner Stephen Fry can point out that for Mayas, Jews, Arabs, the Chinese and others, this day doesn't herald the New Year at all, before adding the optimistic kicker that given the transience of time, this day is as good as any other "to be bright and joyous as the colours of an outdoor market".

Of course, like most people, I dipped in on my birthday'Shaun Phillips, The Times'Galeano performs the sort of extraordinary feats of compassion, artistry, and imagination achieved in fiction by his fellow visionary Latin American writers, especially Borges, Garcia Marquez, and Bolano' Booklist, starred review'Galeano's prose is nearly lulling in its lyricism' Neil Gordon, New York Times Book Review'The elegance of Galeano's words - they're just penetrating, so beautiful' San Francisco Chronicle, Danny Glover'Galeano is a superstar in the Hispanic world ...

His writing is full of candour, empathy, humane concern [and] he has a wonderful eye for the quirky ... he evokes the wonders of a remarkable world that is not so bad after all'John Paul Rathbone, Financial Times'The telling of such secret histories makes it easy to see why Galeano is one of Latin America's most influential writers ... he has produced literature that will endure, monuments to the imagination'Toby Green, The IndependentEduardo Galeano is one of Latin America's most distinguished writers.

He is the author of the three-volume Memory of Fire; Open Veins of Latin America; Soccer in Sun and Shadow; The Book of Embraces; Walking Words; Upside Down; and Voices in Time.

Born in Montevideo in 1940, he lived in exile in Argentina and Spain for years before returning to Uruguay.

His work has been translated into twenty-eight languages.

He is recipient of many international prizes.