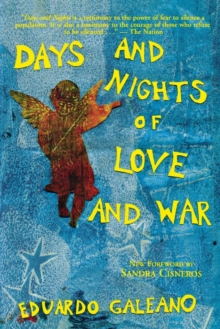 Days and Nights of Love and War

By: Galeano, Eduardo,  Cisneros, Sandra(Foreword by)

In this fascinating journal and eloquent history, Eduardo Galeano movingly records the lives of struggles of the Latin American people, under two decades of unimaginable violence and extreme repression.

Alternating between reportage, personal vignettes, interviews, travelogues, and folklore, and richly conveyed with anger, sadness, irony, and occasional humor, Galeano pays loving tribute to the courage and determination of those who continued to believe in, and fight for, a more human existence.

The Lannan Foundation awarded the 1999 Cultural Prize for Freedom to Eduardo Galeano, in recognition of those "whose extraordinary and courageous work celebrates the human right to freedom of imagination, inquiry and expression."Originally published in Cuba, Days and Nights of Love and Warwon the Casa de las Am?ricas prize in 1978.