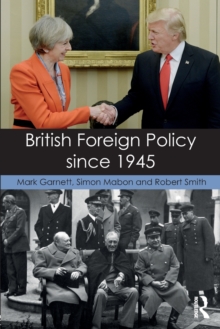 British Foreign Policy since 1945 brings a chronological approach to the study of British foreign policy since the Second World War in order to make the principal events and dynamics accessible within a broader historical and cultural context.

The key features included in this book:a detailed chronological survey of developments in post-war British politics; an integrated discussion of foreign and domestic policy developments indicating connections and interlocking themes; illustrations of British foreign policy drawn from popular culture; analysis of Britain's role in the world, particularly in regards to the UK's 'special relationship' with the US and its decision to leave the EU; a range of in-text features including essay questions and seminar/discussion topics.

This timely book will be essential reading for anyone interested in British politics, foreign policy analysis and British history.