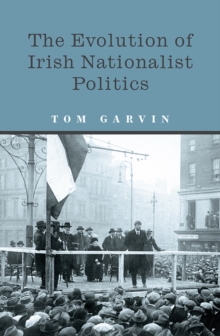 The evolution of Irish nationalist politics

This classic work studies the growth of nationalism in Ireland, from the middle of the eighteenth century to modern times.

It traces the continuity of tradition from earlier organizations, such as the United Irishmen and the agrarian Ribbonmen of the eighteenth century, through the followers of Daniel O'Connell, the Fenians and the Land League in the nineteenth century to the Irish political parties of today.

The dual nature of Irish nationalism is shown in sharp focus.

Despite the secular and liberal leanings of many Irish leaders and theoreticians, their followers were frequently sectarian and conservative in social outlook.

This book demonstrates how this dual legacy has influenced the politics of modern Ireland. 'This stimulating book is one of the most important and original studies of Irish nationalism and politics to have been written...It will be discussed and cited for many years.' - Michael Gallagher, Irish University Review ' Buy it rather than borrow it, since it calls for re-reading, reflection and discussion.

It illuminates both past and present.' - John A Murphy, "The Sunday Tribune" ' a lively and original book' L M Cullen, "The Irish Times".